With the exception of a few soft-leaved and variegated varieties, agaves want sun—the more the better in all but desert climates. Most are hardy to the mid- to high-20s F, and some go a lot lower.

Sharp points at leaf tips and along leaf edges can make agaves treacherous. I snip about a quarter inch from leaves’ needlelike tips with garden shears. 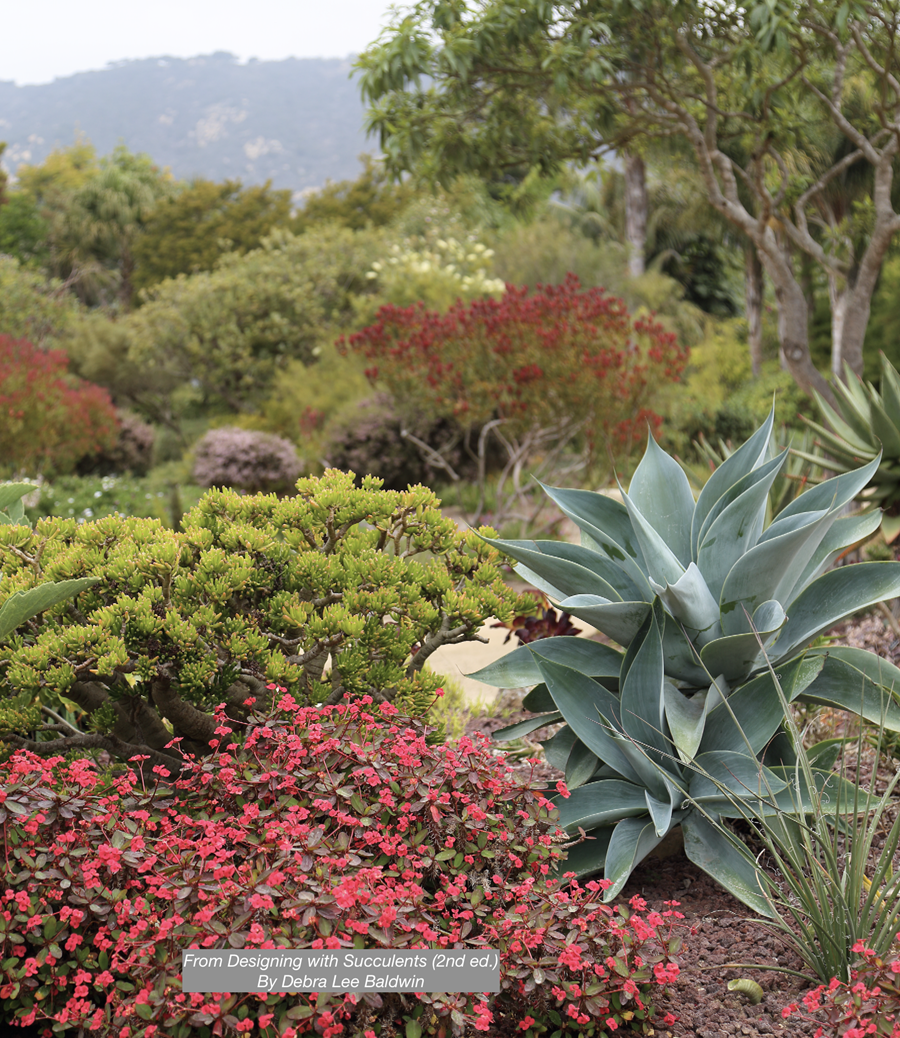 Agaves smaller than basketballs make excellent potted plants. Small agaves—there are many exquisite ones—look good displayed one to a pot. 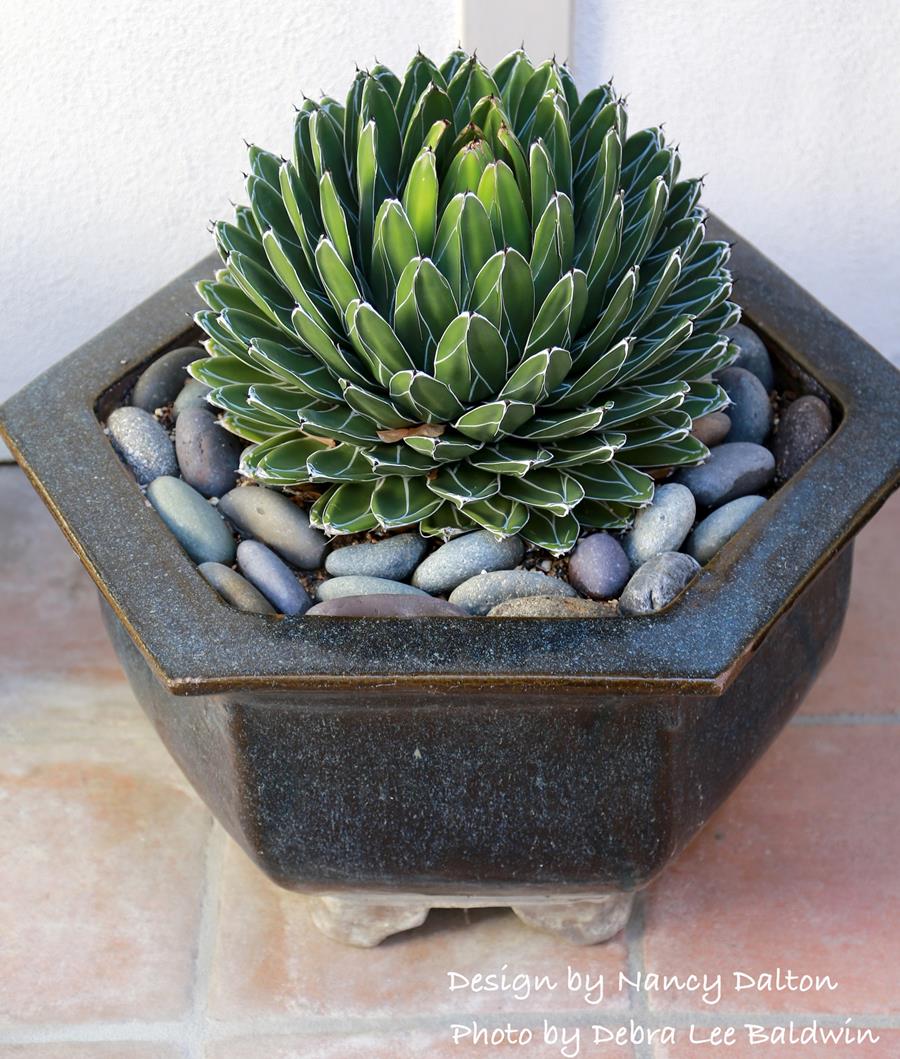 Agaves with serpentine terminal spines and prominent teeth along leaf margins are both graceful and fierce. Don’t they remind you of how cats yawn and show their fangs? 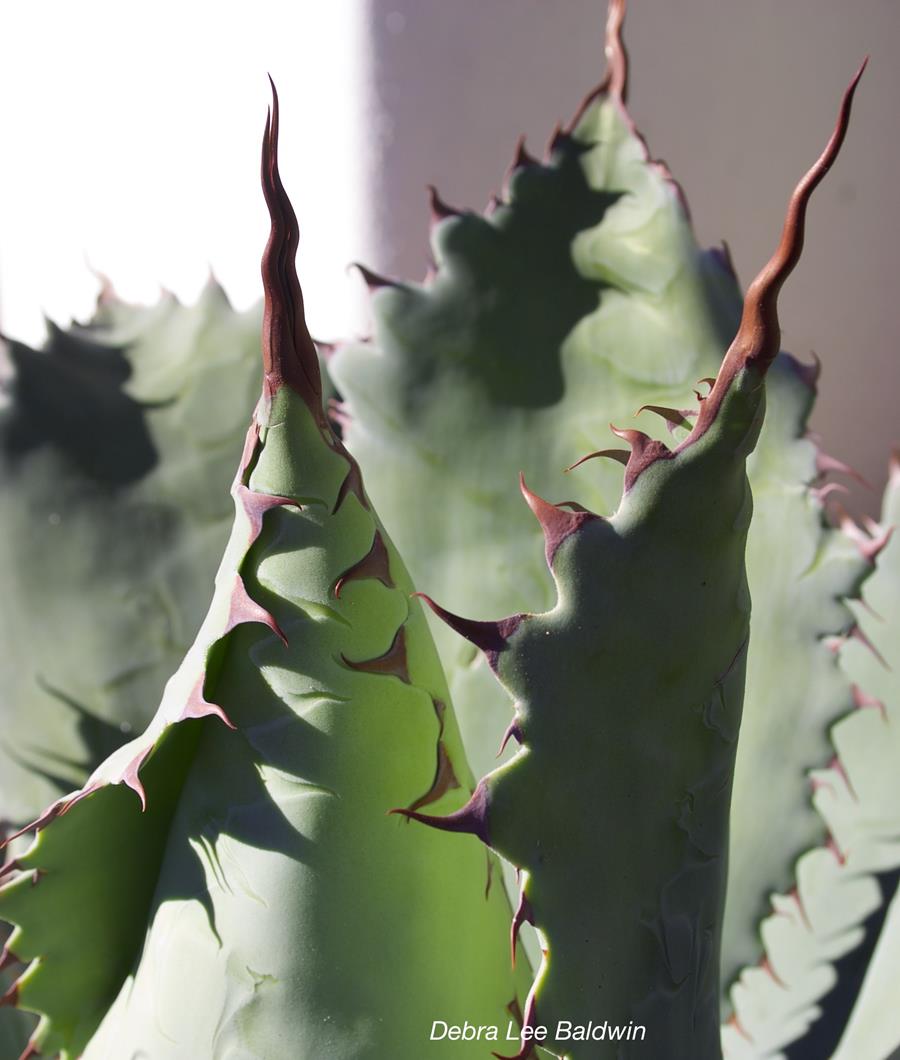 Scalloped patterns on an agave’s leaves (“bud imprints”) are caused by spines and teeth pressing into the flesh of inner leaves before they unfurl. Aren’t they fascinating? 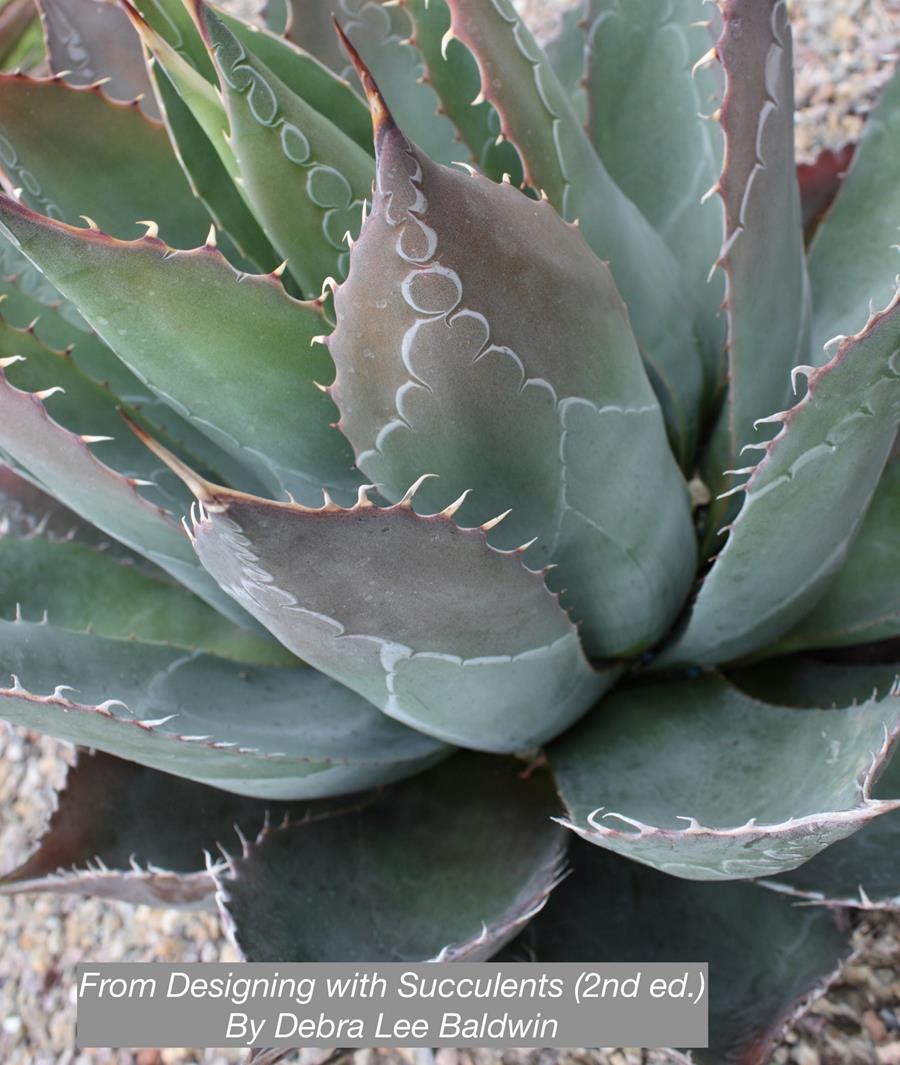 When pruning a damaged leaf, keep in mind that a straight-across cut at its midsection may spoil an agave’s symmetry. It’s best to make two cuts that trim the leaf to a “V” that resembles the leaf’s natural tip. Or cut it all the way to the trunk.

One of the most common agaves, A. attenuata (foxtail agave) has soft, smooth, nonspiny leaves that are prone to sun scorch in summer and frost burn in winter. Damaged tips will collapse and turn white. If this has happened to yours, watch my short video on how to trim them. 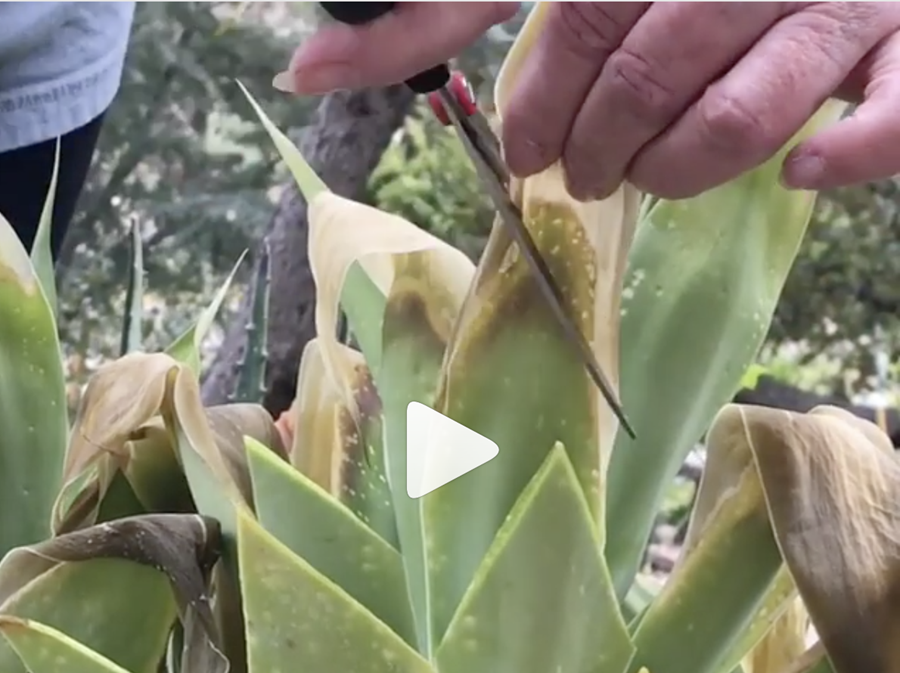 Large agaves that pup (not all do) can be thugs. They’ll grow and spread rapidly, especially when given good soil and regular irrigation. One of the most widely grown is A. americana (century plant), because it offsets so prolifically (free plants!) and needs no care at all…until those pups start to get big and form an unruly, ever-expanding colony. 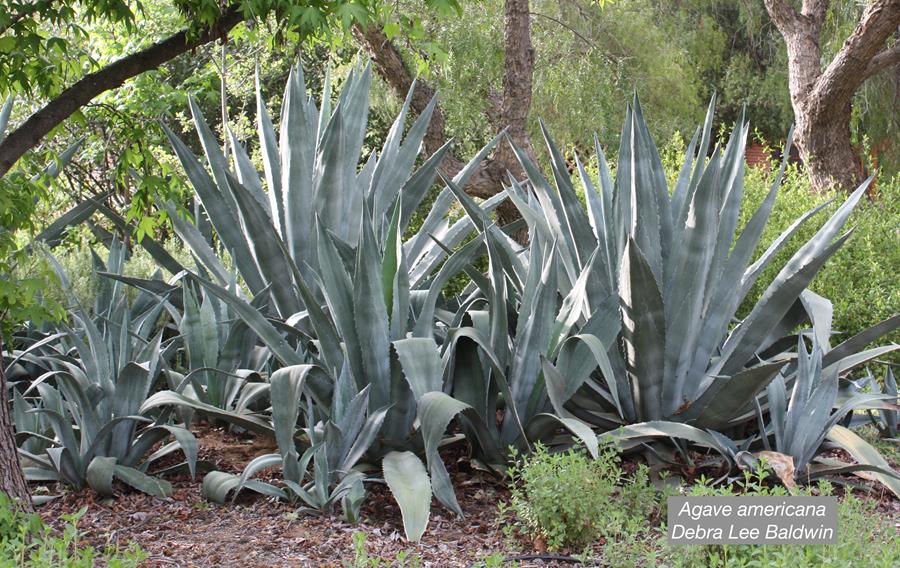 Because it seems that everyone is blithely planting Agave americana these days, agave expert Kelly Griffin and I made a video that gives better choices for the long run: Six Great Agaves for Your Garden. It’s the sequel to What You MUST Know About Century Plants (Agave americana).

Being indigenous to the New World (the American Southwest, Mexico and Central America), larger agaves store enough moisture to get by on rainfall alone and will thrive in nutrient-poor soils. Although agaves like water, their roots—like those of most succulents—will rot in waterlogged soil.

All but a few agaves are monocarpic, meaning they bloom once and then die. This may take as many as 25 years, but it will happen. As it completes its life cycle, a mature rosette that has graced a garden for years sends up an asparagus-like flower stalk (most, but not all, branch). This dwarfs the plant and saps its energy. Flowers along the stalk eventually turn into miniplants (bulbils) or seed capsules. 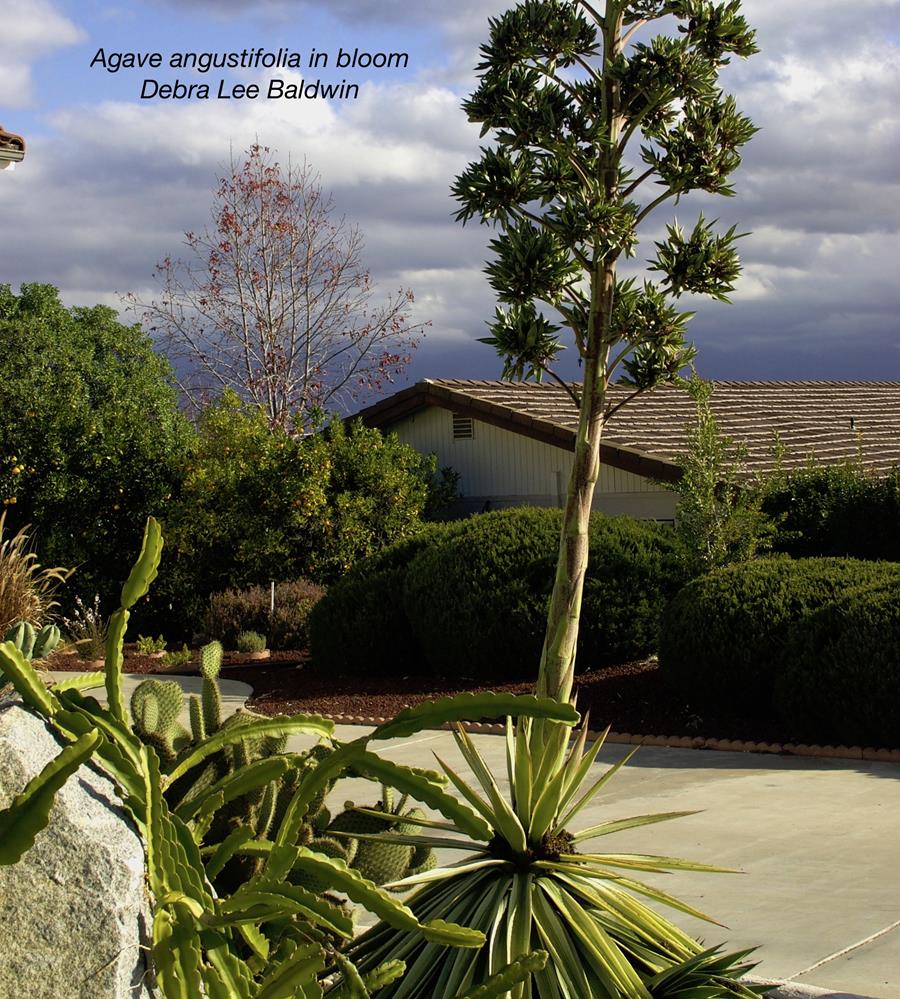 Only the individual agave that flowers dies. In some cases—notably with those involving Agave americana—a litter of pups will carry on. 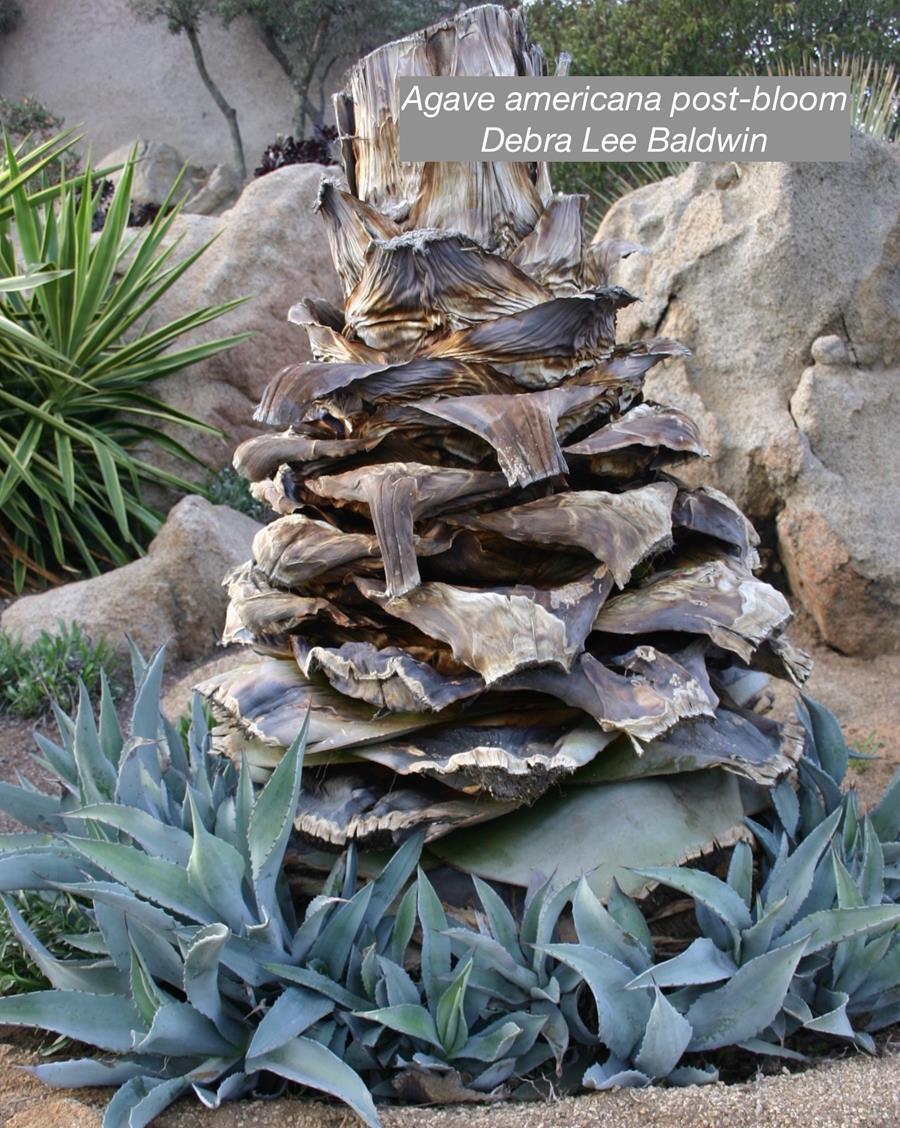 The above is edited from the intro to Agaves in “Succulents A to Z” in Designing with Succulents (2nd ed.). The book, which also covers Aloes among 30 important genera of succulents, includes photos and descriptions of significant varieties, and shows how to grow and use them beautifully in gardens and landscapes.