Immediately after the Lilac Fire, Dr. Camille Newton of Bonsall, CA, texted me that eight homes on her street had been destroyed, yet hers was unharmed. "Succulents saved the day," she said.

Such reports aren't unprecedented. Suzy Schaefer's succulent garden in Rancho Santa Fe "saved our home," she told me (and national media) after the Witch Creek Fire. I had heard of others as well. Even so, I was skeptical. True, succulents tend to cook rather than burn and don't transmit flames. But wildfire is so intense it melts metal and glass. What chance does any plant have?

Moreover, wildfires are wind-driven. A barricade of fleshy plants might halt a brush fire, but what about flying, flaming embers? And isn't it possible that what appears to be salvation-by-succulents is merely the capricious way wildfire skips houses?

Even so, Dr. Newton, a geriatrician who often deals with life-and-death situations, is no sensationalist. She was calm, matter-of-fact, and had photos for proof.

Doubtless you know that I'm a big champion of succulents, but what you may not know is I'm also a journalist. I'm aware of how emotion and wishful thinking can cloud a reporter's judgment. Yet what I saw when I went to Camille's truly amazed me. 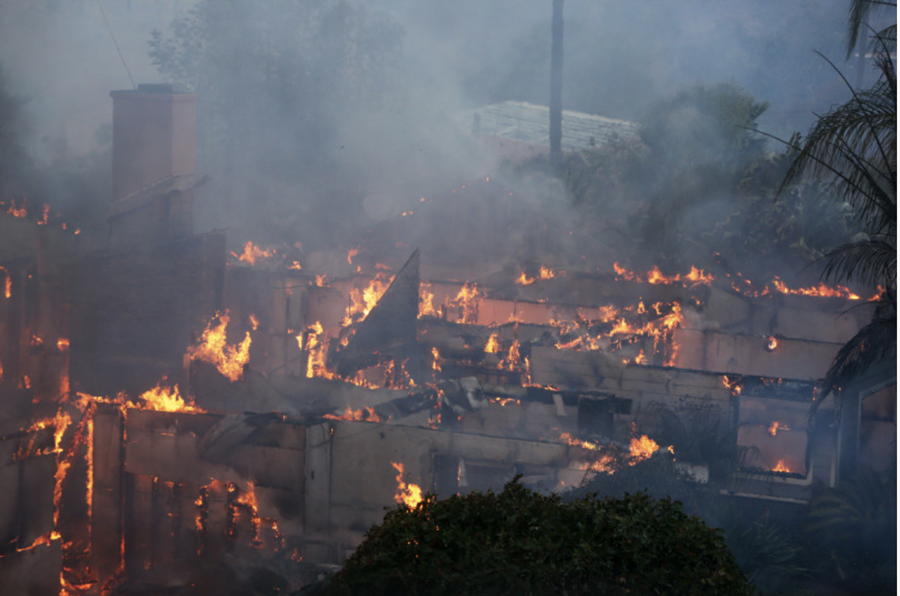 Above: News photo of the house next door to Camille's during last week's Lilac Fire in Bonsall, CA. Below: Same property after the fire. 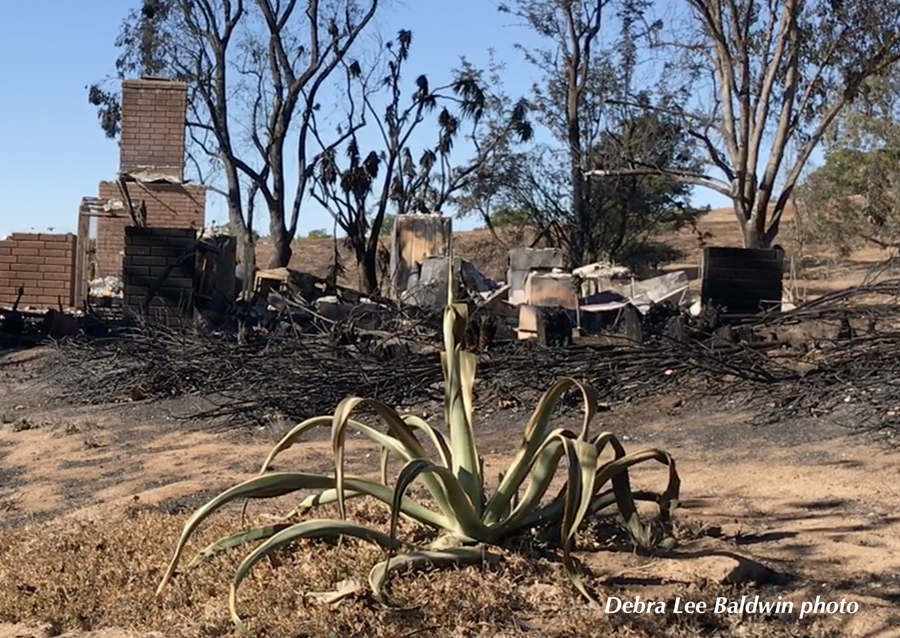 Next door, where a home had been reduced to ash and charred appliances, the only green left in the yard was an Agave vilmoriniana with singed leaves. Along the driveway were a former fence of cylindrical wooden posts that had burned down into the ground, and black sticks---former ornamental shrubs---flattened by fire and wind.

So, what IS it about succulents that makes them...dare I say it...fireproof?

Clearly more research is needed, and YOU can help: If you know of a wildfire-burned home that had succulents planted so densely (like Camille's) that they should have served as a firebreak, yet they didn't, please tell me. Tens of thousands of hopeful California homeowners (myself among them) need to know: Are Camille's and Suzy's experiences merely luck, or did succulents really save their homes?

What I can say with certainty is that planting a swath of moisture-rich, fleshy-leaved plants is smart if you live in a mild, arid region plagued by drought and wildfire. Readily available agaves, aeoniums, elephant's food, aloes, jade, and ironically-named 'Sticks on Fire' propagate easily from pups and cuttings, are low-water and low-maintenance, and when combined, create a gorgeous garden. If it also serves as a firebreak, well---as I told a KFMB-TV reporter---that's certainly icing on the cake. 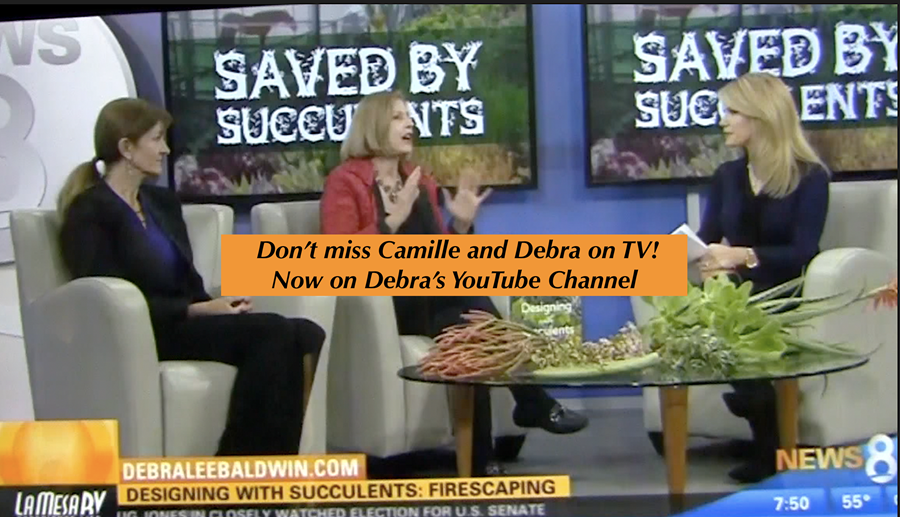 Above: Camille and I talked about firescaping on CBS.

Five days after the Lilac Fire ripped through her neighborhood, I visited Camille and documented her story with my camera and camcorder. Of all the videos I've made (my YouTube channel now has 200+ with over 3,000,000 views) this one is, IMHO, by far the most important. 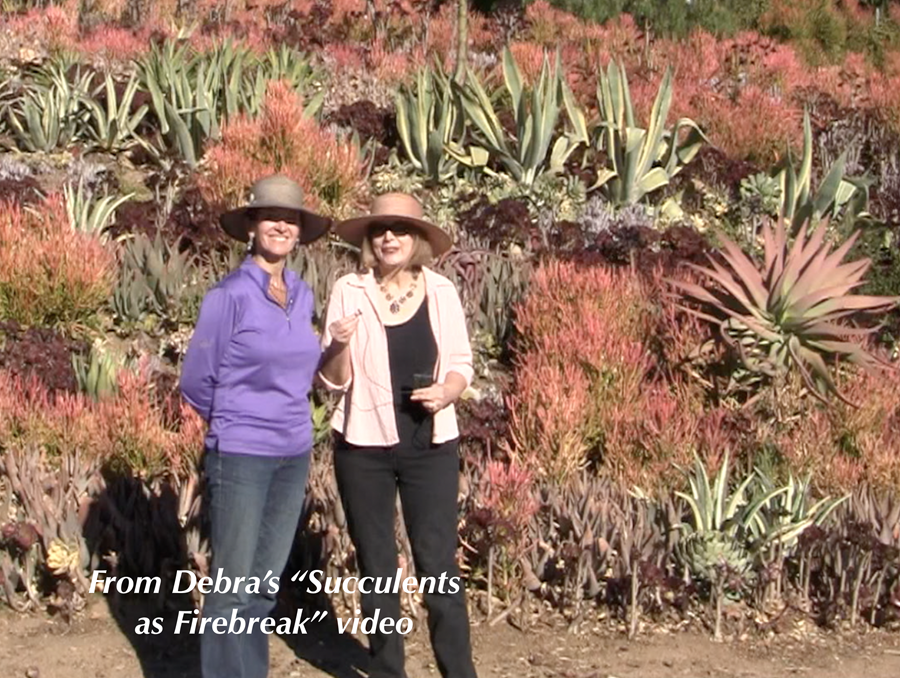 There's plenty more that homeowners need to know in order to create a firewise landscape. Topics I'll address in future newsletters, YouTube videos, and articles include: How to create a succulent garden like Camille's that's broad and dense enough to serve as a firebreak. How to obtain my Top Six Firewise Succulents and start them from cuttings. Also, why Camille's succulents are especially lush and vibrant. (I suspect it's her free-and-abundant soil amendment, composted horse manure, atop a substrate of decomposed granite.)

I urge you to watch my two videos in which Camille shares her story and garden. Also in my video, Do Succulents Burn? I test jade plant, aeoniums, paddle cactus and more by tossing them in a gas fire pit. Even if you don't live with the threat of wildfire or where succulents can grow outdoors year-round, I promise you'll be entertained, fascinated...and, like me, amazed.

Ten years earlier, in Oct. 2007, the succulent garden on the cover of Designing with Succulents (first edition) also "saved" a Rancho Santa Fe home. As in Camille's situation, neighboring houses burned to the ground. [Read more] The garden on the cover of the first edition of Designing with Succulents helped protect the home in 2007. [Read more]

Note: The horrific CA wildfires of 2017 were a vivid reminder of when my husband and I and our two dogs were evacuated in 2007. During three awful days, we didn’t know if we’d have a home to return to. Using succulents as firebreak plants may help protect properties in wildfire-prone areas, but in no way do I want to imply that succulents are THE answer, nor (God forbid) do I want to try to capitalize on others’ suffering. I empathize with those devastated by loss and prayerfully hope this may help prevent it from happening to others. ~ Debra Lee Baldwin

Firewise Landscaping with Succulents Photos and descriptions of the most popular succulent varieties Find tips to help protect your home in the event of a wildfire (scroll to the bottom) as well as real-life examples and advice from homeowners and experts. Discover how succulents act as a living firebreak. Please note: I do not, nor…

Debra’s Top Firewise Succulents Succulent varieties that stand up to the flames My top firewise succulents are quite common and start easily from cuttings. If you live in a fire-prone, backcountry area, consider them one more weapon in your arsenal against wildfire, ideally by planting them around your property’s perimeter. Disclaimer: Growing succulents does NOT…